Le Petit Lenormand Éclectique is a collaborative deck created in 2012. 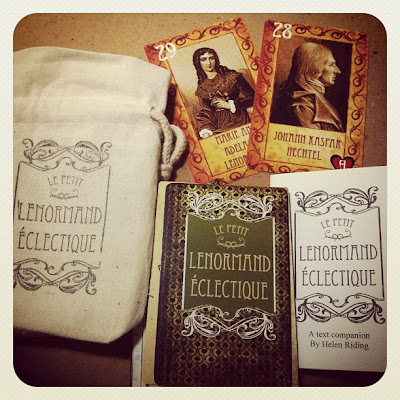 I was responsible for writing the text companion, also known as a little white book (LWB), which contains the following three sections:

A Short History of the Deck
Suit Associations
Card Dictionary

A Short History of the Deck

The deck of 36 cards now known as the Petit Lenormand is based on a deck of cards originally designed for a parlour game by Johann Kaspar Hechtel from Germany and later named after the famous French fortune-teller Marie Anne Lenormand. While we have no evidence that Lenormand used this particular deck, the association with her name no doubt boosted the popularity of the deck and ensured its survival long after many other historical cartomancy decks have been forgotten. The history of the deck is outlined in the timeline below, with some possible Lenormand card associations shown in brackets.

1786: Lenormand left Alençon for Paris where she would become famous for reading cards for the elite of French society, including Joséphine de Beauharnais.
[Woman, Ship, Book, Moon]

1789: The storming of the Bastille prison in Paris by rioters on 14 July symbolized the beginning of the French Revolution, a period of political and social upheaval during which the French monarchy was overthrown and many people were executed by guillotine including the Bourbon King Louis XVI and Queen Marie Antoinette.
[Tower, Garden, Whip, Man, Woman, Scythe, Coffin]

1798/9: Various works by Hechtel including Das Spiel der Hoffnung (The Game of Hope) were published by Gustav Philipp Jakob Bieling of Nuremberg. Das Spiel der Hoffnung is a parlour game that includes a deck of 36 numbered cards* illustrated with primary symbols and corresponding miniature playing cards from a French-suited deck and a German-suited deck.
[Man, Key, Book, Bouquet, Sun]

1804: Napoléon Bonaparte and his wife Joséphine were proclaimed Emperor and Empress of the French.
[Man, Woman, Sun, Tower, Rider]

1810: Napoléon Bonaparte divorced Joséphine as she had not given him an heir.
[Man, Woman, Child, Coffin, Ring, Scythe]

1814: The House of Bourbon was restored to power in France.
[House, Tower, Coffin, Rider]

1814: Lenormand took up a second career as a writer.
[Woman, Crossroad, Letter]

1846: Reiff, a German publisher in Coblenz, took the liberty of using Lenormand’s name on a fortune-telling deck and many other European publishers later followed suit publishing similar decks. These decks have the same card numbering, primary symbols and playing card associations as the cards in Hechtel's Das Spiel der Hoffnung game, but the German-suited miniature playing cards are no longer included.
[Book, Moon, Sun, Whip]

*The deck has two uses in the game explanation:
1) when arranged in a 6x6 layout it was used with two dice for a race game, and
2) when arranged in an 8x4+4 layout it was used for fortune-telling entertainment. The name of the game derives from card 35 (Anchor, a classic symbol of hope) which is the winning position in the race game.
[Book, Crossroad, Clover, Whip, Anchor]

In this Lenormand deck we have used suit symbols which incorporate the shapes of the standard French suit symbols and colours associated with the corresponding German suit symbols. This hybrid suit system was inspired by the suits currently used in German Skat tournaments as a compromise between different decks used in different regions of Germany.

The meaning of a card in a reading depends on, among other things, the possible meanings adopted for the card by the reader, the context of the question asked, the position of the card in the spread and other cards in the spread.

Lenormand iconography lends itself to interpretation in various ways and sometimes there are multiple layers of meaning in a reading. Apart from the literal and pictorial interpretation of a card, a card’s main symbol may be interpreted as a concept by traditional association (based on its symbolic meaning) and as an object or person of similar form (based on how it manifests). The court cards associated with some of the cards may also be used to represent or describe people in a reading.

Some possible card meanings by association and form of the card’s main symbol are listed below. Cards representing money, work and sex vary by system and these meanings are therefore included in brackets.

28 (A♥): Man, Gentleman
29 (A♠): Woman, Lady
Catchphrase: "His and Hers"
Association: Cards 28 (A♥) and 29 (A♠) are the main significator cards in Lenormand, traditionally representing the enquirer and the enquirer’s significant other. (Note that some decks include additional significator cards for enquirers in same-sex relationships.) These cards could however represent other people depending on the context of the reading.
Form: male and female