[This post was first published on 31 May 2012. I subsequently created Wikipedia entries for Johann Kaspar Hechtel in English and German.]

The prototype for the Petit Lenormand deck, das Spiel der Hoffnung (the Game of Hope), was advertised in a book titled Humoristische Blätter für Kopf und Herz published by Bieling in 1799 (see book extract from Google Books below, thanks to Huck Meyer for bringing it to my attention in the Aeclectic Tarot Forum). Das Spiel der Hoffnung is listed under the author's name, Hechtels JK. 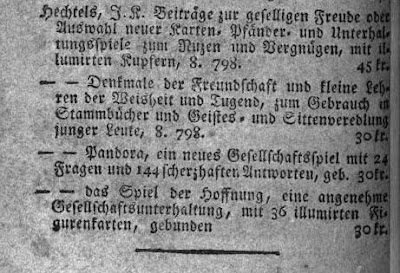 I also found an advertisement for the game in an 1820 German youth newspaper (Neue Jugendzeitung, Volume 11) among a large selection of games advertised, including some games with an explicit lottery theme which I suspect also influenced the layout and images of das Spiel der Hoffnung.

I have established the author's full name to be Johann Kaspar Hechtel and I have found some short biographies for him in Google Books which I will attempt to translate below. 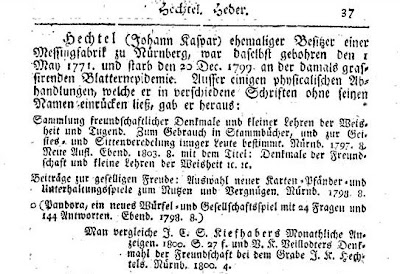 Hechtel (Johann Kaspar) former owner of a brass factory in Nuremberg, was born there on 1 May 1771 and died on 20 Dec 1799 of the smallpox epidemic raging at that time. Except for some treatises on physics which he contributed to different works without his name, he published:

♦ Collection of friendly tributes and small teachings of wisdom and virtue; for use in albums, and intended for the refinement of the spirit and morals of young people. Nuremberg, 1797. 8. New edition ibid 1803. 8. with the title: Tributes of friendship and small teachings of wisdom etcetera.
♦ Contributions to social pleasure: Selection of new cards, tokens and entertainment games for utility and pleasure. Nuremberg, 1798. 8.
♦ Pandora, a new dice and parlour game with 24 questions and 144 answers. ibid. 1798. 8.
[♦ The Game of Hope, a pleasant parlour game, with 36 illuminated figure cards, cased. (This last item is quoted from the 1799 Bieling advertisement above for completeness, it is missing from his biographies however.)]

The book Denkmale der Freundschaft by Hechtel which was first published in 1797 is currently in print although it may be very difficult to read (thanks to Google Books, you can look inside the original book here).

While in Nuremberg so to speak, I stumbled upon an example of a popular Bilder-Lotto (picture bingo) which was published in Nuremberg c1840 (in the same place where the Game of Hope was published c1799). These boards are still manufactured as children's educational toys in Germany today (named Bilder-Lotto or Picture Bingo) and are very similar to Mexican Lotería. You can view some examples for sale on amazon. This places the Biribissi lottery board game concept much closer in time and place to the Game of Hope (note that about two-thirds of the Lenormand images can be found on various Biribissi boards preserved in the British Museum).

Update 4 June 2012:
In June 2012 I acquired an engraved portrait of Johann Kaspar Hechtel from Germany. I have subsequently shared the image below on Wikimedia Commons. 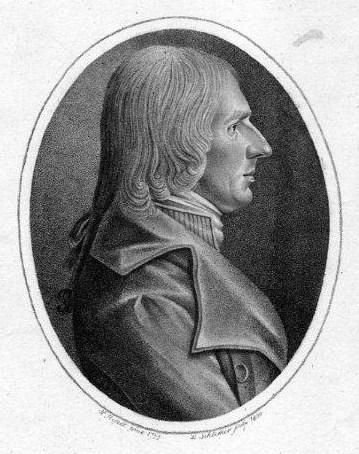