The name of the famous French cartomancer, Marie Anne Adelaide Lenormand (1772-1843), was first used in connection with the 36 card Petit Lenormand deck designed by Johann Kaspar Hechtel a few years after her death no later than 1846. 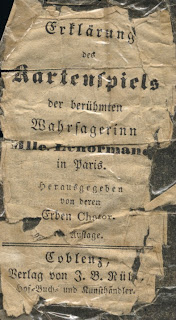 Such cards with a publication date of 1846 are included in a listing of new German publications as follows:

This translates into English roughly as follows:

You can see some images of such early decks dated c1846/7 in the Lenormand Museum here and here.

Wolfgang Kunze of spielkartenonline kindly provided me with the images included in this post of such a deck missing two cards sold by him and gave me permission to publish them for which I am very grateful: