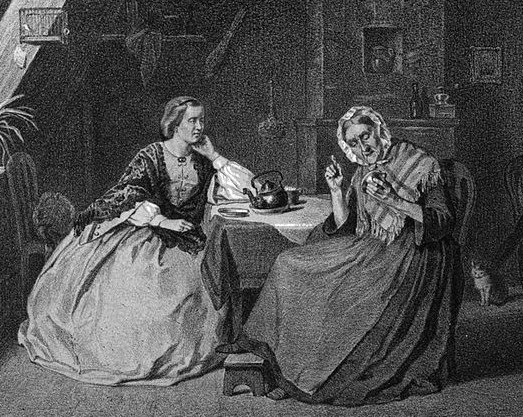 The illustrated stripped deck of 36 playing cards named after the famous French fortune teller Mademoiselle Lenormand, which has been popular since the middle of the 19th century, was modelled on an earlier deck designed for das Spiel der Hoffnung (Game of Hope) by Johann Kaspar Hechtel and published in Nuremberg in 1799. The original Game of Hope instructions preserved in the British Museum do not contain explicit fortune telling meanings for each card, but we do have individual card meanings for the so-called Lenormand deck published in Coblenz in 1846 and traditional German playing card suit symbolism is evident in the deck (see also Suit Associations in Le Petit Lenormand Éclectique LWB). Enquiring minds want to know more about the origins of the symbolism of the deck, and the search goes on.

In July 2013 Mary K. Greer wrote about her discovery of a deck of 32 illustrated cards published in London in 1796 on the British Museum website.[3] The British Museum has since kindly also uploaded scans of the accompanying booklet to its website. The deck is described as "the coffee pack" in the booklet "because the figures are borrowed from those represented by the grounds in the cup". There is an inspirational proverb on each card and the booklet contains an "explanation of the emblematical figures, represented by the grounds of coffee in the cup", which closely resembles the Lenormand card meanings published in 1846. The booklet also includes instructions for laying out the cards "in four rows of eight cards each", with the cards in the row and column of the card representing the person having their fortune told relating to them. The booklet claims "these entertaining games first made their appearance at Vienna, in 1794", and contains an improbable story of the emblematical figures originating from "a book of Egyptian hieroglyphics" discovered in a convent library in Germany in 1793.[4]

Thirty of the 32 named and numbered figures are included in the 36 card Lenormand deck, either in the same form or a close equivalent such as Bouquet instead of "The Rose, the Carnation or any Other Flower", Bear instead of "The Lion, or any Other Ferocious Beast" and Man instead of "The Pedestrian" (note that the 1796 booklet instructs us to use the "the male figure on foot" or "the pedestrian gentleman" to represent a man who wants to have his fortune told). The two figures not included in the Lenormand deck are named The Green Bush and Worms. The Lenormand deck includes 6 additional figures not in the 1796 deck, namely Ship, Fox, Stork, Tower, Book and Key, giving us a total of 36 cards. Hechtel's card numbering is different, except for the Heart card which is numbered 24 in both decks, and may be based on a storyline underlying his parlour game.

Mary's discovery confirms that the Lenormand card meanings published in 1846 were derived from coffee grounds symbolism and explains the concept of distance in these meanings as well as some curious phrases such as "surrounded by clouds" and "several [trees] together", which always puzzled me as there is only one Clouds card and only one Tree card in the deck. While there is an overlap of 30 symbols and the Lenormand card meanings published in 1846 are clearly based on coffee grounds symbolism, Hechtel's deck published in 1799 is not necessarily derived directly from the 1796 deck or an earlier German edition thereof. He could have chosen a different subset of a group of symbols commonplace in Germany society at the time to illustrate his playing card deck, which was later combined with coffee grounds symbolism and marketed as a similar fortune telling game to the 1796 deck.

The meanings of the emblematical figures in the 1796 booklet are also essentially the same as those given for coffee grounds symbols in British fortune-telling chapbooks such as The Spaewife; or Universal Fortune-Teller from around 1850,[5][6] and several versions of a Fortune Teller and Dream Book published in the United States in the late 1800s and early 1900s.

Huck Meyer and I have found several sources for the Lenormand deck's pictorial symbolism which predate the Lenormand card meanings published in 1846 and the deck published in 1796. Huck found similar coffee grounds symbol meanings in old German books,[7] and I recently stumbled on similar symbol meanings in some old German dream books. Note there is a somewhat different coffee grounds divination system based primarily on geometric figures and multiples thereof which is often attributed to Tomaso Tomponelli, and not all old German dream books contain these particular dream meanings which do not appear to have made it into the English language mainstream literature.

Coffee became popular in Germany around the middle of the 18th century, and we know from a religious diatribe published in Leipzig in 1742 that fortune telling from coffee grounds was an established practice by then.[8] Dream interpretation is an ancient form of divination. Johannes Gutenberg invented his printing press in the 15th century, and numerous dream books listing dream symbols and their meanings were published in Italy, France and Germany soon thereafter.[9]

The relevant sources are listed for the two divination categories below, followed by a comparison of meanings for a particular symbol.

1763: Das Carneval gelehrter Phantasien (The carnival of scholarly fantasies) published in Frankfurt and Leipzig in 1763 contains a chapter titled Die Wahrsagerey ("Fortune telling") on pages 28–34, an overview of contemporary fortune telling practices. The author describes Dutch and German women combining the reading of "hieroglyphic figures" in coffee grounds and cartomancy, using a significator card chosen by the enquirer and laying out 36 cards in 4 piles of 9 cards each. A few coffee grounds symbols and their meanings are mentioned in passing.

1798: Ausführliche Beschreibung der Sprachmaschinen oder sprechenden Figuren (Detailed description of speaking machines or speaking figures) by Heinrich Maximilian Brunner, a doctor of medicine and philosophy, published in Nuremberg in 1798 contains a list of over 80 coffee grounds symbols including some very brief meanings on pages 146–150, which the author says is needed in order for humans or machines to explain the figures.

1805: Ganz neu aufgelegtes Traumbüchlein aus den Papieren einer alten Frau, daraus ein jeder Lotto spielender Liebhaber seine Träume untersuchen und darauf in der Lotterie sich glücklich machen kann. Durch erprobte Erfahrung verbessert und auf’s Neue in Druck gebracht. (Brand new issue of a dream book from the papers of an old woman, from which every lottery enthusiast can explore their dreams and make themselves fortunate in the lottery. Improved through proven experience and newly printed.) contains an appendix titled Anhang und Auslegung der Träume, nach Art der Egyptier, nebst den Nummern der Lotterie, die solche bedeuten ("Appendix and interpretation of dreams, according to the method of the Egyptians, together with the corresponding lottery numbers") listing over 200 dream symbol meanings on pages 52–63. An 1861 edition published in Augsburg, Bavaria, is viewable online (linked above). I found online references to earlier editions, including one published in Augsburg in 1805,[10] and it was listed as a banned book in Bavaria in 1844.[11]

The research presented on this blog is an ongoing collaborative effort and I would like to thank everybody involved in solving the Lenormand jigsaw puzzle.