After taking a break from my cartomancy studies, I started reading Mystical Origins of the Tarot by Paul Huson and at the same time happened to get caught up in the latest wave of interest in Lenormand. As a result something that made no sense to me before suddenly clicked into place, namely the significance of the playing card suits in Lenormand.

The Petit Lenormand deck is based on a regular playing card deck that has been reduced from 52 cards to 36 cards by removing the 2, 3, 4 and 5 pip cards in each suit. The cards are illustrated with various symbols and traditionally also include a miniature of the playing card associated with each symbol. Little seems to be known or understood about the significance of the playing cards, other than that the court cards can serve to describe people in a reading. There are also regional and personal variations throughout Europe in the card meanings, especially regarding which cards represent work, money and sex. The card meanings I have adopted are sometimes referred to as the French school or tradition.

"Detlef Hoffmann has shown that their prototype can be clearly traced back to a lovely little pack of fancy cards, called 'Das Spiel der Hofnung (sic) / Le jeu de l'espérance' (The Game of Hope), published around 1800 by G.P.J. Bieling in Nuremberg."
A Wicked Pack of Cards: The Origins of the Occult Tarot (1996),
Ronald Decker, Thierry Depaulis and Michael Dummett

[You can see a complete set of these cards on The British Museum website here.] 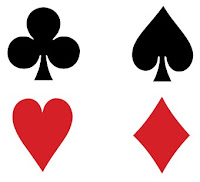 Regional variations developed in suit signs after playing cards found their way into Europe, and the standard suit signs we use today originated in France in the 15th century. The English names given to these French suit signs are not the same in meaning as the French names except for Hearts. This could explain why modern English-speaking cartomancers view the suits somewhat differently to 18th century French cartomancers such as Antoine Court de Gébelin and Etteilla and whoever originally assigned specific Lenormand symbols to specific playing cards.

I wanted to know how the English suit names came about and have posted some information I found online, for interest sake below.

"The English names of the suits are in part adopted from the Spanish, and partly from the French; yet it is singular that the suits on our Cards are altogether those of the latter nation. It has been seen in a former page, that a Latin writer of the sixteenth century called the suit of Spades, Ligones*; the resemblance of the object represented on Cards of that Suit, to one of the forms of the agricultural spade is striking, and hence we may account for the origin of this denomination; the similarity of sound between the Spanish term Spada**, and the English word Spade, may also have led to the adoption of it. The French call the suit of Clubs Trefle, from its resemblance to the Trefoil leaf: although we have obtained the form of the object from them, we have retained the Spanish word Bastos, literally translated. In admitting also the French suit Carreaux, we have in some degree gone beyond the licence of translation, in calling it Diamonds. Of the remaining Suit, Hearts, it is merely necessary to remark, that we have adopted both the name, and the object, from the French Cards."
Researches into the history of playing cards (1816), Samuel Weller Singer

"The mark now called the Trèfle, in France, was formerly known as the Fleur ... As the names, Clubs and Spades, given to two of the suits in this country, by no means correspond with the marks by which they are distinguished, - to wit, the French Trèfle and Pique - I am inclined to consider them as the old names for the suits of Bastoni and Spade; Clubs being merely a translation of Bastoni, and Spades probably a corruption of Spade, or Espadas, - Swords. From these names, indeed, it may be fairly supposed that the cards first known in England were those having Swords, Clubs, Cups, and Money, as the marks of the suits; and that two of those suits retained their names when the old cards of the Spanish or Italian type were superseded by those of more recent French design."
Facts and speculations on the origin and history of playing cards (1848),
William Andrew Chatto

It is interesting to note here that Clubs, once called Fleurs in French, are still called Fiori in Italian (both words mean flowers).

"The suit symbols now most widely known are those associated with international games such as bridge. Referred to as 'French suits' because of their French origin, they are unique among western cards in that their symbols are not illustrations of objects but very simple shapes in silhouette. This feature arose from the early innovation of printing them from a stencil instead of the more usual woodcut. In the French, German and Spanish languages the resulting shapes are interpreted as heart, clover leaf, pike-head and square (or tile). Their odd English names, none conforming to the others except for the heart, seem to owe more to a folk-memory of Mediterranean suits than to the shapes they actually represent. The typical Italian suit system uses the same symbolic objects as the Spanish (cups, coins, swords and clubs), with some differences of style dating back to an early stage in their history. Other distinctive suit systems are those associated with Germany, with hearts, leaves, acorns and falconry bells. The Swiss symbols are broadly similar but with heraldic shields and roses replacing the hearts and leaves."
The Playing-Cards of Spain: A Guide for Historians and Collectors (1996),
Trevor Denning

Contrary to popular belief, Huson believes that the Clubs suit sign is derived from the Italian Coin and not the Italian Baton.

"It's customary among historians to derive the trèfle, the cloverleaf French suit sign that we call a Club, from the Italian Baton. However, it's my belief (along with cartomancers of the French school) that it's far more likely that the cross-shaped Clover Leaf represented the pattern to be found on the interior of the Italian Coin ... As for his suit cards, Etteilla followed Court de Gébelin in equating all Trèfle (Trefoil) cards (and their meanings) with his Coin suit (contrary to many present-day cartomancers who identify Coins with Diamonds); he identified all Coeur (Heart) cards with his Cup suit; all Pique (Pike) Spade cards with his Sword suit; and all Carreau (Paving Tile) Diamond cards with his Baton suit."
Mystical Origins of the Tarot: From Ancient Roots to Modern Usage (2004),
Paul Huson

We have some idea of what 18th century French cartomancers such as Court de Gébelin and Etteilla believed the Tarot suits symbolically represented from the correspondences to social classes of Court de Gébelin's peer Comte de Mellet:

"Swords represent royalty and the powerful of the earth; Cups the priesthood; Coins commerce; and Batons agriculture."
A Wicked Pack of Cards: The Origins of the Occult Tarot (1996),
Ronald Decker, Thierry Depaulis and Michael Dummett

"De Mellet complained that 'Our fortune-tellers do not know how to read the Hieroglyphs having removed from them all the Tableaux and changed even the names of the Cup, the Baton, the Coin, and the Sword, of which they knew neither the etymology nor the expression; they substituted the suits of hearts (happiness), diamonds (indifference and countryside), clubs (fortune), and spades (misfortune) ... But they have retained certain figures and several expressions, consecrated by usage that lets us see into the origin of their divination.'"
Tarot for Your Self (2002), Mary K Greer

When I applied Huson's alternative Tarot suit correspondences for Clubs and Diamonds to my Lenormand dictionary, I suddenly observed a theme of sorts for each Lenormand suit that is more clearly linked to the elemental concepts now associated with the corresponding Tarot suit for divination purposes. This may indicate that the Lenormand deck was influenced to some extent by the thinking of 18th century French cartomancers who contributed to the history of occult Tarot, or it may be a lucky coincidence.

Clubs includes cards that represent money, work, physical activity and challenges. Hearts are primarily related to love and relationships. Spades includes cards related to communication, travel and legal matters. Diamonds are related to luck, danger, decisions, risk and reward. The suits may be thought of as a hierarchy of needs, with Clubs/Pentacles/Earth representing our basic physical needs and the other suits representing our higher order needs of love (Hearts/Cups/Water), mental stimulation and justice (Spades/Swords/Air) and creativity (Diamonds/Wands/Fire). I have posted a few salient keywords per card below.

Mais oui, I will definitely be paying more attention to the Lenormand suits in future readings!